The Carbon Removal Show is an in-house production from Cofruition exploring the world of negative emissions.
‍
The show aims to explain the what, why, who and how when it comes to taking carbon out of the atmosphere in order to control the climate emergency.

How it all began

The Carbon Removal Show was born when Sam, the founder of Cofruition, got talking to Hampus Jakkobson from Pale Blue Dot VC about negative emissions. Hampus, through his work investing in carbon removal companies, was struck at how important this concept is for the planet, and how little it was understood by the general population. His meeting with Sam concluded with “Can you make a podcast to educate the world about this?”
‍
The answer was, a resounding yes. The Cofruition team then set about building a podcast from scratch, a distinctly different challenge to working with a client. That meant hiring hosts, a producer, a researcher, a designer, a composer and an editor to create the kind of high quality podcast we felt the subject deserved.

Once we had the team together we set about planning out the show. The key to an effective podcast was how best to tell such a complicated and technical story in a way that was easy to follow for the regular listener but that wouldn’t patronise those who already had a knowledge of the subject.
‍
The answer to this was to plan a discrete series of episodes that laid the foundation for *anyone* to understand carbon removal. Eventually the team settled on a format where each episode had a specific question to answer; i.e. “Why not just trees?” or “How do we make this profitable?”. These questions were then thoroughly researched in order to give the audience a full, balanced and informative answer.
‍
Several guests from the scientific/ business/ research community were booked for each episode to give the listener the opinions of industry experts and to inform and validate our findings. They provided a good example of the competing opinions at play in this complicated field.

The extensive research put into each episode informs a rigorous pre- and post-production process which involves scripting, recording, drafting, re-records, editing and transcription. It is one of the most comprehensive and detailed production processes of any podcast at Cofruition and requires the talent and dedication of every team member.
‍
In addition to this, The Carbon Removal Show has an original score professionally composed specifically to the needs of the show. The composer worked closely with the producer to produce a number of specific themes (main theme, cold open etc.) as well as a suite of reusable cues reflecting different moods that we wanted to portray across the series. 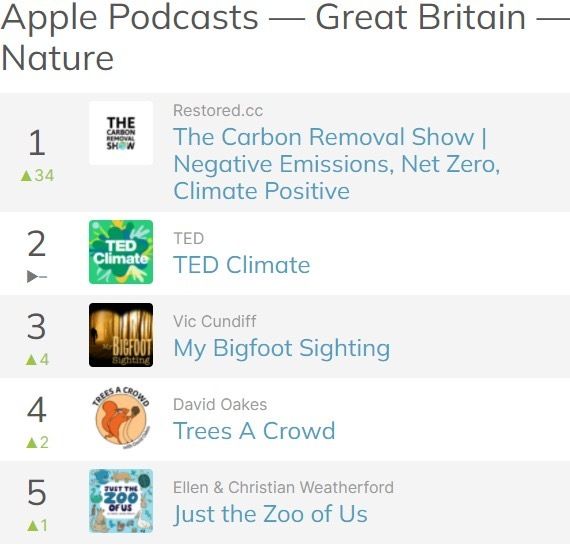 The podcast achieved great success on launch, hitting #1 in the Apple Podcasts UK Nature charts on release day, as well as reaching the top 30 in the Science category.
‍
The utility of the podcast goes beyond just the listening experience. The Carbon Removal Show has its own website at restored.cc, where transcriptions of each episode are available so that all that valuable research isn’t locked in audio form. The show also has a newsletter which publishes after the release of each episode and provides a behind the scenes view of each episode alongside any new carbon removal news from the week.

Send us an enquiry